Top Ten Tuesday: Characters who remind me of myself... 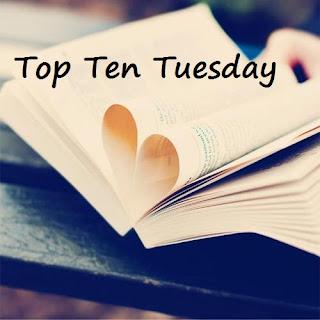 Top Ten Tuesday is a super fun meme hosted every week over at the broke and bookish--be sure to go and check it out!


This week's topic is rather hard! It's quite rare that I read about a character and think of myself or someone I know, because I think of the characters as their own person... does that make sense?
So anyways, I've decided to list some character that remind me of certain aspects of my personality instead...

1. Kat (Obsidian by Jennifer L. Armentrout)
Why, you ask? Because she's a fellow book blogger!

2. Tessa Gray (Clockwork Prince by Cassandra Clare)
Likewise, I see a bit of myself in Tessa in her love for literature--even though we prefer different genres--and her love of Will Herondale. (Yes, I just had to got there...) But she also reminds me of the quiet and serious me.

3. Becky Bloomwood (Confessions of a Shopoholic by Sophie Kinsella)
OK. Confession time. The thing is, I.... I'm a.... shopoholic!
I just... I don't know guys, I just see pretty stuff at the mall and it's like I experience a blackout and the next thing I know, I'm waking up surrounded by shopping bags!
It's the darnedest thing...

4. Hermione Granger (Harry Potter series by J.K. Rowling)
Not only am I a bookish nerd, I'm also a school nerd.... as in, I'm one of those people who likes needs to do well in school. It's probably just the way I was raised, but I quite devoted to my school studies and heaven forbid I get a bad grade! D:

5. Caitlin (Dreamland by Sarah Dessen)
No, I have never in my life been in the unfortunate situation that Caitlin was in in the book, but I do understand what it's like to have an older sister who seems perfect in every way.

6. Lucy (Graffiti Moon by Cath Crowley)
I feel like we all have a part a Lucy in all of us--that part that yearns to find the perfect other so often read about in books. For her, it's Mr. Darcy, I believe. For me, it's Will Herondale. I mean, I'm sure we've all got them! Sometimes, I swear romance novels ruin me for the real world...

7.   Erin Blackwell (Love Story by Jennifer Echols)
Well, I should start by telling you that Erin aspires to be a romance novelist.... ye-ah.
I can't say that being a romance novelist is what I want to do with my life, but I can't help but see myself in her in the fact that she loves romance novels! She does this thing where she pretty much has an entire story unfolding in her head, and I do that too!  Also, we both have a love for writing!

8. Anna Oliphant (Anna and the French Kiss by Stephanie Perkins)
Anna and I both have a passion for reviewing things we love--even if other people don't really get it and think it's slightly weird! For her, it's reviewing films, for me, as you might've guessed, it's reviewing books!

9. Lily (Dash & Lily's Book of Dares by Rachel Cohn and David Levithan)
The character of Lily really reminds me of my good friend, Anna. They're both quite quirky, but extremely lovable, and they don't care what other people think of them.

Argh! I hate leaving a list unfinished, especially when I'm so darn close! But like I said, this was a hard topic, and I just can't think of any more!