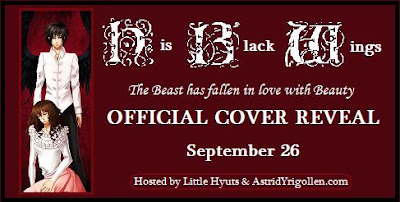 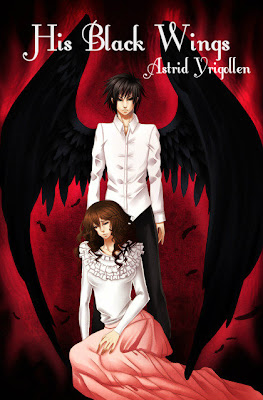 His Black Wings is...
Beauty and the Beast set in the future during a Victorian era revival.
The Grand Council has brought the world peace, but will it last?
Malice, revenge and lust are not easily defeated...

Claren Maidstone has been forced to flee her childhood home, following the death of her parents and a vicious attack from a man who intends to marry her.
She assumes a new identity and finds employment as an assistant to the handsome, Fredrick Lowood. However, Fredrick's generosity isn't without a price and Claren soon finds herself forced into a strange friendship with his disfigured son.
Unaware of how Claren's past entwines with his own,
Etrigan Lowood begins to yearn for her love.
Unfortunately, the past is not far behind.
Is his love for Claren enough?
Or will Etrigan remain alone with his black wings...

My Thoughts:
I am loving the manga vibe of this cover! And the colors too! As for the story, pshhhh you had me at "Beauty and the Beast," AKA one of my all-time fairy tales. I can't wait to read this book!! X) 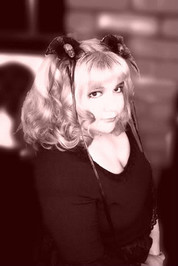 Astrid Yrigollen is a self published author of young adult and children's books. Astrid started her writing career when she begun work for the international video game giant, Sega of America. Working her way up the ranks, she began writing companion guides for games. With a love for writing fiction since childhood, she took her short stories out of storage and had her first story ever written published. It was only after that she found out that first stories are never published! She has resumed writing full time and has succeeded in putting out the titles, The Doughnut Tree, Mysterious Pootkins, and The Mosswoods--to name a few. Her short stories have appeared in the literary journal of Threshold Press and Shock and Awe Magazine.

*Giveaway is hosted by the author, I'm simply providing the rafflecoptor to enter
Posted by Joie at 6:00 AM