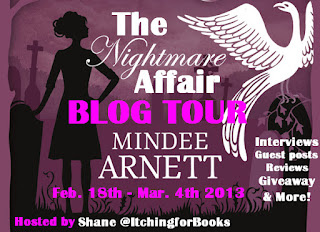 Q: Where did you get your inspiration for creating a Nightmare?

The first time I ever came across a Nightmare as a creature was in a short story by one of my favorite fantasy authors, Jennifer Roberson. In her story, the “Nightmare” appears in the shape of a hellacious rodeo horse. Years later, as I was sitting down to do some brainstorming about potential monsters, I started to think about that story. A couple of Wikipedia searches later and I came across a picture of The Nightmare by John Henry Fuseli.  The moment I saw it, I asked myself what it would be like if the demon and woman were reversed.  And presto-change, the idea for Dusty was born.

Q: Who was your favorite character to write about, and why?

Dusty is definitely my favorite character to write about. She sort of has to be because she’s the MC, and the story is in her voice. But my favorite non-MC character to write about is Dusty’s best friend and roommate Selene Rivers. Selene is a siren. Like all sirens, she’s utterly beautiful, but she dresses like a tomboy and spends a lot of her time campaigning against the sexual objectification of sirens in the magickind world. I love writing about her, because she’s cool and mysterious, but very smart, funny, and loyal to Dusty.

Q: If The Nightmare Affair were made into a movie, who would your dream cast be?

My dream Dusty has always been Molly Quinn. I think she’s so adorable and charming, but she can totally be a BAMF if she wants to. Also, her eyes are exactly how I imagine Dusty’s to be: 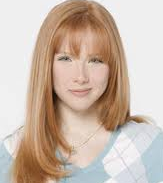 I’m going to cheat when it comes to Eli, because I’m just too damn old to lust after any actors of appropriate age to play him. I’ll leave that lusting up to the readers. And I can’t wait to see who they come up with!

Meanwhile, I’m going to pretend we can go back in time and snag a young Timothy Olyphant. This is what I imagine Eli might look like. Oh, and his character is a bit like a teenaged Raylan Givens from Justified—the kind of guy who might grow up to be a lawman with an outlaw side. 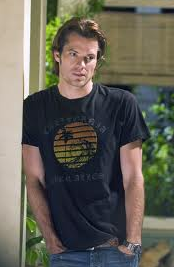 For Dusty’s best friend, Selene, I would pick Teresa Palmer only she would have to dye her hair black. Teresa’s mannerisms just remind me of Selene, the way she carries herself, her poise. It’s a nice fit

For Paul, I’m going to cheat again and go with a teenage Charlie Hunnam. Now, just who is Paul, you say? Well, all I’m going to tell you is that he’s an Arkwell student. You’ll have to wait for the book to find out more. It’s like River Song keeps saying to The Doctor: “Spoilers.” 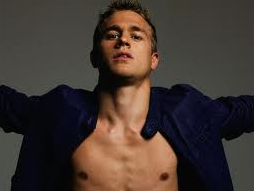 Q: Do you listen to music when you right? If so, what was your playlist for writing The Nightmare Affair?

I listen to music off and on when I write, but it’s primarily soundtracks. If I put in anything with lyrics, I tend to start singing along. But some of my favorite soundtracks to listen to when writing The Nightmare Affair are Sherlock (BBC) and Harry Potter. Really, even more than music, I tended to listen to Veronica Mars episodes a lot when writing. Sounds weird, I know, and I couldn’t do it all the time, but occasionally, listening to episodes really helped me get into the voice of the story.

But if you’re interested in a playlist about The Nightmare Affair, you can find it here.

Thanks for such awesome questions! I had a blast.

Thank you for taking the time to do this interview! I especially enjoyed seeing your casting picks! :)
Don't forget to check out Mindee's debut novel, The Nightmare Affair.

Email ThisBlogThis!Share to TwitterShare to FacebookShare to Pinterest
Labels: blog tour, Mindee Arnett, Q and A, The Nightmare Affair