Alyssa Gardner hears the whispers of bugs and flowers—precisely the affliction that landed her mother in a mental hospital years before. This family curse stretches back to her ancestor Alice Liddell, the real-life inspiration for Lewis Carroll’s Alice’s Adventures in Wonderland. Alyssa might be crazy, but she manages to keep it together. For now.
When her mother’s mental health takes a turn for the worse, Alyssa learns that what she thought was fiction is based in terrifying reality. The real Wonderland is a place far darker and more twisted than Lewis Carroll ever let on. There, Alyssa must pass a series of tests, including draining an ocean of Alice’s tears, waking the slumbering tea party, and subduing a vicious bandersnatch, to fix Alice’s mistakes and save her family. She must also decide whom to trust: Jeb, her gorgeous best friend and secret crush, or the sexy but suspicious Morpheus, her guide through Wonderland, who may have dark motives of his own.


The description of this book, like a delicious cake you might find at the Mad Hatter's tea party, was utterly irresistible. But here's the thing: appearances can be deceiving. Reading this book was like salivating over a delicious dessert only to find, when eating it, that the icing was too sweet and the cake too crumbly.

Splintered is the story of Alyssa Gardner, a descendant of Alice Liddell, who suffers from a family curse of spiraling into Wonderland-esque insanity. But events unfold, realizations happen, and Alyssa learns that Wonderland is absolutely real, but much dangerous and twisted than the Lewis Carroll story.

While in theory this book sounded like the coolest thing since nutella, the actual read was less riveting than I'd imagined. I think the author tried to include too many aspects, trying to afford each one equal attention that, in the end, the story was smothered by it. The descriptions of the Wonderland creatures, though brilliantly envisioned, were too detailed and lenghthy and were overwhelming to process. The overemphasized love triangle distracted from the plot and led to ill-timed frisky moments just for the sake of romantic development.

As for the characters, I couldn't connect with any of them. Not even the heroine despite being in her head for  nearly 400 pages. Here's the thing: I felt like Alyssa could have been such an epic character. The girl loves to skate, wears colorful dreadlock extensions in her hair, has electric eels for pets, and makes beautiful mosaics out of dead bugs. HOW COOL IS THAT? But unfortunately, my reaction to Alyssa ended up being rather MEH. Didn't love her but didn't completely hate her either. So many of her thoughts were taken up by her unrequited love for Jeb and hatred of his girlfriend and it was just annoying to read about!

I know this book is advertised as having a love triangle, however, despite Alyssa's attraction to Morpheus, it was obvious that Jeb was always the main love interest... And oh how I wished he wasn't!! No offense to the Jeb fans out there, but he was by far my least favorite character in the whole book. I found him to be way too controlling and overprotective (in a whether-you-like-it-or-not kind of way). And at times even douchey. I tried to like him, I really did! But nope. Just couldn't do it. Every time he showed up in a scene, I would mentally groan.

You know when you're reading a book and the main character and love interest have a Moment? Their eyes meet, there's romantic tension, and the whole time you're like: 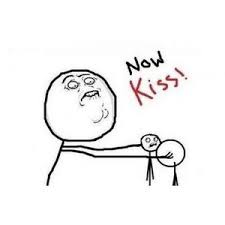 And when they finally do...

Ye-ah, that wasn't the case with this book. Each time Jeb and Alyssa had romantic moments, it was just awkward to read about. I can't really explain it but it was almost like watching PDA in the real world.

What's more, there is a time and a place for making googly eyes at your crush. And that time, dear Alyssa and Jeb, is not while you are worrying for your survival with crazy creatures trying to hunt you down!

Personally, I much preferred Morpheus's character. The guy was twisted, mysterious, morally questionable.... and I kind of loved it! (Le sigh. I suppose I've always had a thing for the bad boys).

I will say that the world-building was probably the shining gem of this book. This Wonderland that Howard has crafted is so different from that of the original story... and I absolutely loved it! The sheer creativity and imagination that went into creating this twisted land with bizarre customs and grotesque creatures is truly laudable. From the wacky traditions to the Wonderland afterlife, I was fascinated and I dearly hope that there might be another book in the future exploring more of Wonderland.

All in all: I know most of this review has been me talking about the negatives of this book, but I really did enjoy reading this. Yes, the love triangle really wasn't my cup of tea, but I am really glad I read this book because the adventure was action-packed and the world-building was mind-blowingly fantastic.
If you're into Alice retellings, or just retellings in general, then I definitely recommend this book.