Top Ten Books I Wish Could Have Had Sequels

Hosted over at The Broke and Bookish

Coming up with 10 books for this list was... surprisingly hard.
As I looked back on all the books I'd marked as read on goodreads, I realized just how many of those books were part of a series. Must go out and explore more stand-alone novels. 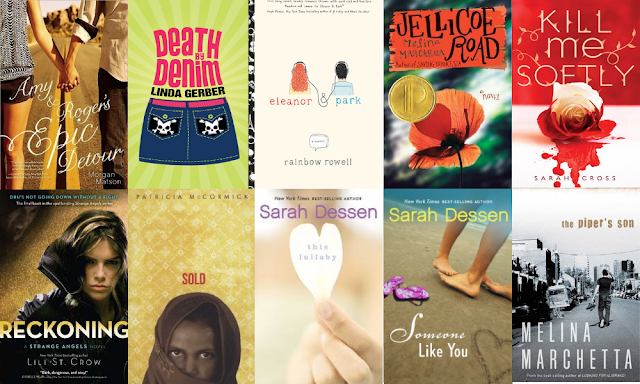 Amy & Roger's Epic Detour by Morgan Matson
The whole book was about Amy and Roger coming together and I'd really like to see how they are as a couple.

Death by Denim by Linda Gerber
The ending of this was good, but too open-ended for my liking!! I need to know what happens to my OTP!

Jellicoe Road by Melina Marchetta
First off, this book was perfect as a stand-alone. I wouldn't change a thing about it. But I love the characters so much that I definitely would not mind a sequel.

Kill Me Softly by Sarah Cross
The fairy tale curse aspect is so cool and I definitely think it could be explored further in a sequel or spin-off. (*ahem* I'd particularly love a Beauty and the Beast retelling...)

Reckoning by Lili St. Crow
What even was that ending?!?!?! Endless. Frustration. If ever there should be a sequel for a series that has already ended, it would be for this one.

Sold by Patricia McCormick
I think this as a stand-alone was absolutely perfect. Flawless. But McCormick captured the protagonist's voice and the hell that she was going through so beautifully that I'm sure if she ever decided to write a sequel, it would be equally wonderful. Plus I really would like to know what happens to the protagonist after that ending.

This Lullaby by Sarah Dessen
I loved Remy and Dexter! I'd love to have a whole book to see how these two fair after Remy's in college.

Someone Like You by Sarah Dessen
In my opinion, this is the only Dessen book that really needs a sequel. Hallie and Macon. I just- I WANT SOME ANSWERS, OKAY?

The Piper's Son by Melina Marchetta
I don't know if this one counts since Marchetta has said that she has an idea for a Jimmy Hailler book in mind, but I haven't heard definitive news about this would-be book yet.
But I want it. Really, really badly.